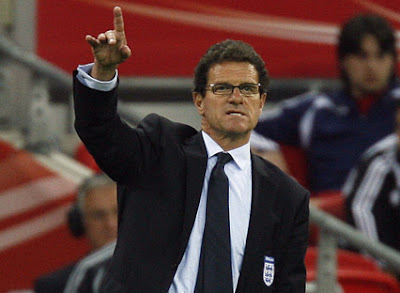 Principle 1: When the pressures becomes too great, team member performance will decline - or even go into reverse.
The role of a leader is to shield team members from too much pressure. Yes you want your team members aroused, stimulated, full of adrenaline and motivated – but when they’re gripped by fear, they are going to under-perform. And in this case, we’ve seen England under-perform badly.
Exactly how Capello is making these pressures worse is open to debate. I won’t pretend to know exactly what’s going on behind those closed doors.
Admittedly, the English press and the fans alwyas tend to dig-in hard with their criticisms when England do badly, which doesn’t help. But something we’ve not seen before is going on.
Somehow, it feels like Capello is making the pressures far worse.
Maybe it’s his selection techniques (holding information back to the last moment), sticking rigidly to his tactical 4-4-2 formation, having perhaps overly zealous discipline and restricting the players to mindless activities when back at base… whatever is going on, the players are terrified of making mistakes and holding their place.
Certainty is the antidote to fear - and “gruff and grumpy” Capello, I suspect, isn’t giving them very much certainty.
In business, however bad things get, it’s a vital leadership and management task; to monitor and manage the emotions of a team. In the current economic climate, great leaders will be keeping their team focused on the most important tasks - and celebrating even the smallest of wins.

Posted by Martin Riley Leadership and Business Development at 11:01
Email ThisBlogThis!Share to TwitterShare to FacebookShare to Pinterest