How to create a Superteam!

Knocked out... but still a Superteam?
(Originally posted summer 2010) 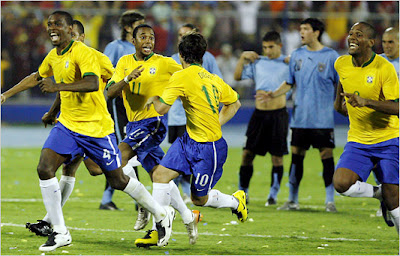 Many teams in the World Cup had 'average' players, but still performed well.
Some teams, like Brazil performed well and were sprinkled with superstars.
Supposedly, England had it's fair share of superstars, but never got going as a team. So what went so wrong at the World Cup? Was a vital element missing from their teambuilding?

In my previous blog we looked at the key factors that need to be present for any team to perform well:

7 key factors to build a Superteam!

My greatest suspicion falls on no2: ability in defined skills and roles.
The players skills and roles were certainly defined. Players knew their positions and what is expected of those roles. And as some of the best players in the Premier League, they undoubtedly have enormous footballing skill.

My understanding is that many of them were playing out of their usual position.
I’ve said before, I’m not a football pundit, so please correct me if I’m wrong. But it seems to me that a trait of many England managers over the years is to pick players who excel in a certain position. They play consistently, week in week out for their Premiere League clubs – and then the England manager plays them in a new and strategic role – out of position – at the World cup.
I’ve never understood it and I still don’t. Enlighten me someone, please, if there is any wisdom in their (in my opinion) madness!

So a key principle for great teambuilding is to play to people's strengths.
Play them in position. Use their natural strengths and abilities. Let them do the work they love to do, in the way they do it best, if it adds value to the company.
If you need more from them, make sure they’re up for the challenge, have adequate training and support, and time to acclimatise - before you play them in a new position.

Posted by Martin Riley Leadership and Business Development at 11:17
Email ThisBlogThis!Share to TwitterShare to FacebookShare to Pinterest